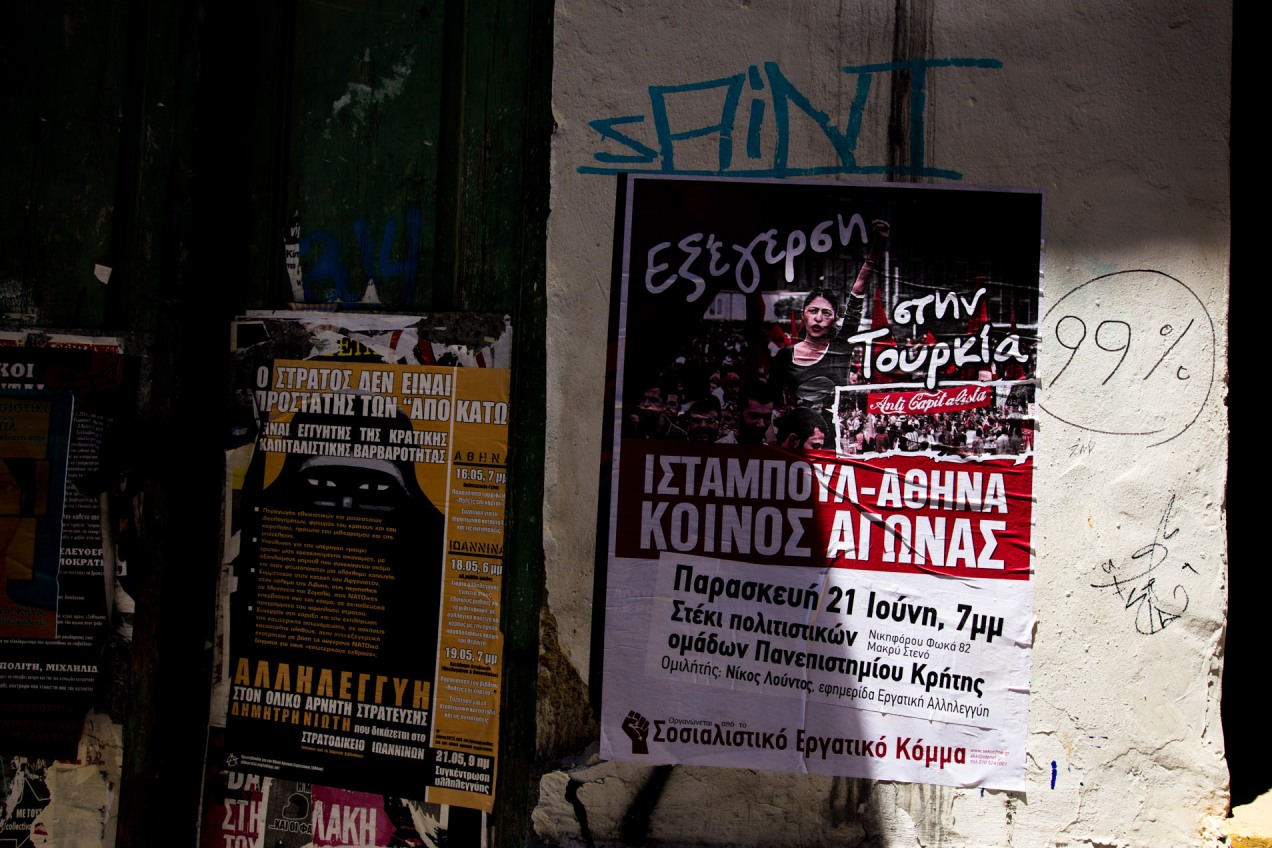 The Occupy Movement’s rallying cry for solidarity and opposition to inequality sits alongside a poster for the Greek Socialist Worker Party (ΣΕΚ) advocating camaraderie between Greek socialists and Instanbul’s ‘Gezi Park’ protestors (further information can be found here).

Greece’s economic malaise has driven some of its citizens towards reactionary political ideologies which seek to divide people on the basis of their nationality or race, as evidenced by the rise in popularity of Golden Dawn, a party linked to violent attacks against migrants living in Greece. Whilst some Greeks have tilted towards the right of the political spectrum though, others have embraced ideological movements which advocate a common cause, struggle, and universal brotherhood – the most famous of these being the global ‘Occupy’ movement, whose goals are to unite the global masses against the inequalities in capitalism which see a mere 1% in possession of the vast majority of capital. The universality of the Occupy message is made all the more crucial in the case of Greece and Turkey, two states whose historical relationship is be characterized by animosity given their colonial pasts (all the more significant on a island like Crete, which was only liberated fully from Ottoman rule in the early 20th century).

The poster on the left of the photo is produced by an Anarchist organization named ‘The Initiative for Total Refusal of Enlistment’. The poster asks for support for Dmitri Nioti, who refused the mandatory conscription required of all Greek men over the age of 19 (university students are able to defer until their mid-20s), and was due for a court martial hearing in May 2013. Anarchist groups massed to protest on his behalf outside the court in the Ioannina in North West Greece, where Nioti was given a 6 month suspended sentence and a 6,000 Euro fine. With the recent political, economic, and social turmoil in Greece, and the rise of more ‘radically’ minded parties and ideologies, opposition has mounted against more traditional institutions such as the Greek Army and Police force, which are perceived to be defenders of the status quo. This poster accuses the Greek Army of not being a ‘protector of the lower classes’, labeling it a ‘Guarantor of state capitalist barbarism’. It also takes aim at the Greek army’s role in Western driven military operations, such as the Afghanistan war, intervention in the Libyan civil war, and involvement in NATO operations in the Mediterranean and Somalia. The Greek army’s naval training exercises with the Israeli military (given Israel’s tempestuous relationship with Palestine and the Arab states), are also criticized. The anarchists also question the role played by the Greek military in policing and controlling protests against the Greek government, arguing that the military plays a part in ‘suppressing’ opposition by classifying them as ‘internal enemies’. Most recently, on the 7th November, the Greek government had riot police storm the TV headquarters of the shuttered state broadcaster ERT (EPT in the Greek alphabet), which had been occupied by a group of journalists since it was controversially closed down by the government in early June, in a bid to cut Greece’s public sector costs. According to the UK Guardian, Greece is the only state in the EU to have ever closed down its public broadcaster.

N.B. On 17th November, an anti-establishment group named The Militant People’s Revolutionary Forces (previously unknown) claimed responsibility for the drive-by shootings that killed two young Golden Dawn members in Athens. The group claimed the shooting was in retaliation for the death of left-wing rapper Pavlos Fyssas, who was killed by a self-proclaimed Golden Dawn supporter.